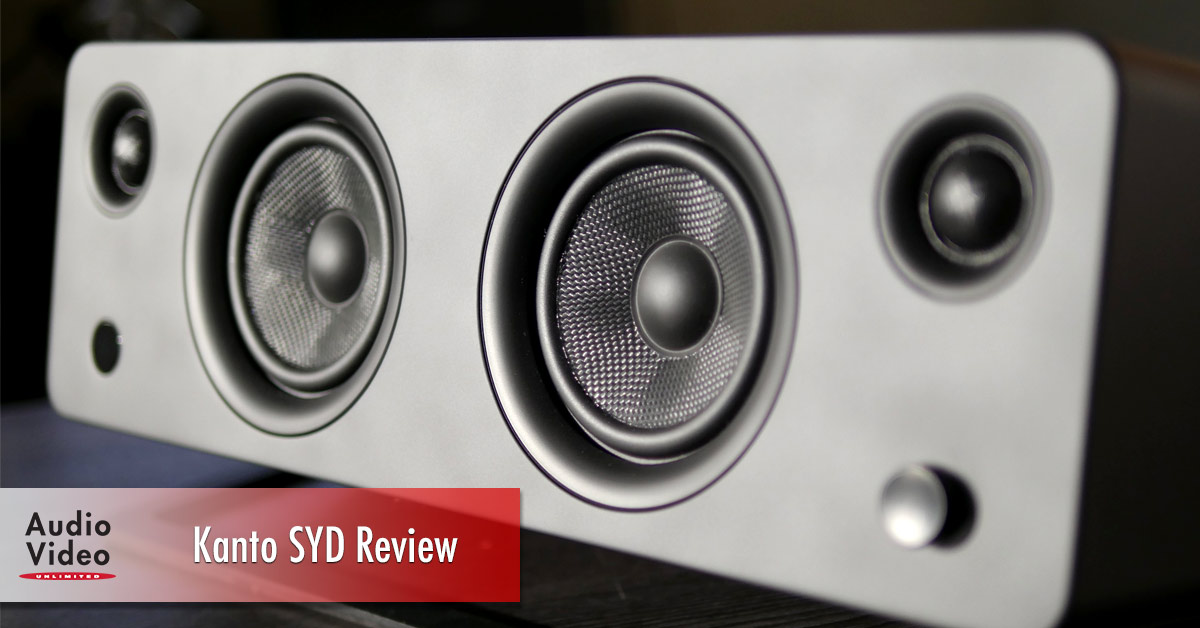 I’ve been excited to review the new Kanto SYD since it was first announced. The unique shape and style of the speaker immediately brought up a few questions: Is it meant to be a soundbar? Is it supposed to replace Bookshelf speakers? Is it a true stereo speaker?


I had the opportunity to live with the SYD for about a week, where I was able to listen to music, watch shows & movies, and try it out when gaming to get a good idea of its capabilities. In this review, I’ll be comparing it to the Kanto YU4 & YU6 Speakers which we have previously reviewed, and also to a soundbar with a wireless sub that I have at home.

Designed to be a high-quality speaker system for use in smaller spaces, the SYD essentially looks to be the Kanto YU4’s in a single box. It features the same 4″ Kevlar drivers, 1″ Silk dome tweeters and a 2 channel class D amplifier. The SYD also features the same audio connections as their other powered speakers, being Bluetooth, 2x Optical (TOSLINK), 3.5mm Aux, RCA input, with a phono preamp that lets you plug a turntable directly into the unit.

The unique size and shape of the unit was the first thing I noticed. It’s clearly too big to be placed in front of a TV, however, could be placed under a TV on a TV stand, or mounted TV. It also takes up far less space than a traditional bookshelf speaker setup, and it looks like the SYD was designed to work in condos or apartments where space is at a premium.

The matte black finish looked great, I much preferred the matte finish to the glossy YU6 we previously reviewed. The SYD is also available in off-white, burgundy, and pink. As is standard with Kanto Speakers, the setup was extremely easy. Even easier with the SYD than the other models actually, as there is no need to wire speakers together. I plugged in the power cable and was instantly listening to Spotify through Bluetooth. Setup doesn’t get much easier than that!

As is standard with our reviews, I like to first listen to Jazz to hear how the system reacts to acoustic, not overly processed instruments. The SYD sounded great. Typically I find I have to turn down the treble on Kanto speakers, but with the SYD the change was not as extreme as the other Kanto speakers. In the YU6 review, we discussed how classic Jazz often pans the instruments hard left/hard right. I was pleasantly surprised how the SYD was able to unify the mix, while still providing enough room for each instrument to breathe. I may actually prefer to listen to Jazz on the SYD compared to separated Bookshelf speakers.

I moved on to listen to the new album by The Carters (Beyonce & Jay-Z). The SYD definitely doesn’t shy away from pop or Hip-hop. While it may not get as loud as the YU4’s, it’s more than enough to power a living room dance party. Previously I found the Kanto YU4’s to be a bit lacking in Bass response when listening to Hip-hop, so to test the SYD I put on the same track I listened to previously (SuperBass by Nicki Minaj). Despite listing the same frequency range (60 Hz – 20 kHz), the SYD felt to have a significantly better bass response to this track than the YU4’s, likely due to the different construction. It did have a much smaller stereo field, however, for obvious reasons. You can always add a small subwoofer to the SYD to really fill out the low end if necessary.

Movies & Gaming
It was very easy to connect the Kanto SYD to my TV, with a single optical cable. The audio while gaming sounded great. While playing Fallout 4, gunshots were defined and punchy, and the atmospheric background sounds were well reproduced. The only minor issue I had with the SYD while gaming, was hearing a character talking from the right side or left side depending on where they are on the screen. Due to the limited size of the stereo field on the SYD, my soundbar did a better job of simulating a surround effect.

While I turned the treble down for listening to music, I turned it back up when gaming or watching movies, as it really helped bring some settings to life, for example hearing crickets in the background of an outdoor scene. While there is clearly no surround sound element to these speakers, they are still a significant upgrade to your standard TV audio.

Sound is very directional, and it always baffles me when TV stands are built to place soundbars so far below the TV that they will be pointing towards your knees. The tilted SYD speaker stand ensures that the sound will be directed at your ears, and does a great job of helping the SYD fill a room with sound.

In my home, almost every electrical plug has already been spoken for, so having a USB charging port on the back of the SYD was actually quite useful.

Final Thoughts / Should You Get The Kanto SYD?

While the SYD may not be for everyone, for some specific use cases it is a great option. I highly recommend the SYD for anyone in a smaller living space, such as an apartment, condo, dorm room, or who will primarily be listening to music in their bedroom. If you want a simple but great sounding system, where you don’t have to worry about running wires, and can connect to pretty much any audio source, then the SYD is for you. If you are more of a HiFi purest, and want a classic 2-channel speaker system and have the room to accommodate it than you will probably be more happy with the Kanto YU6 or YU4.

Let us know if you have any questions about the Kanto SYD in the comments below!